As announced a few weeks ago during the Globe 4G launch, Globe now has a new Tattoo stick (USB modem).

As advised during the 4G launch users must have a device that has the capacity to handle HSPA (4G), so if you want to experience this on Globe you either have to get this Tattoo stick or a 4G capable phone/tablet/newer laptop.


The Tattoo stick is available at Surf-All-You-Want Plan 2,199. More info available at http://tattoo.globe.com.ph 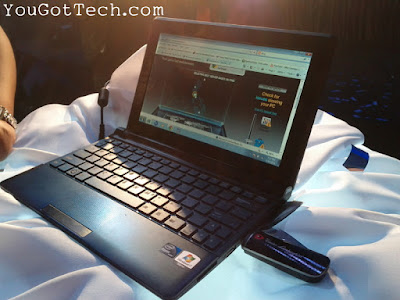 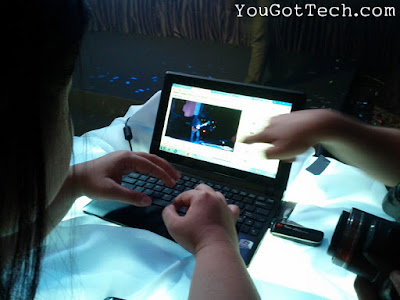 We got the chance to experience the super speed Globe was claiming during the event and here's what we got when we did a speedtest on Internet Explorer (right) and Google Chrome (left). 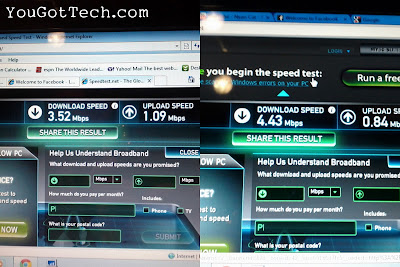 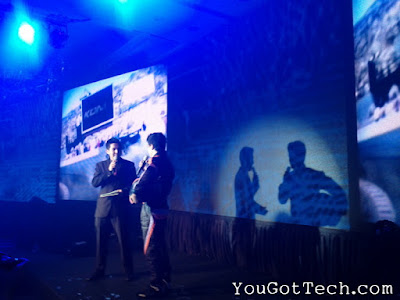 And the rest of the Globe Tattoo endorsers - 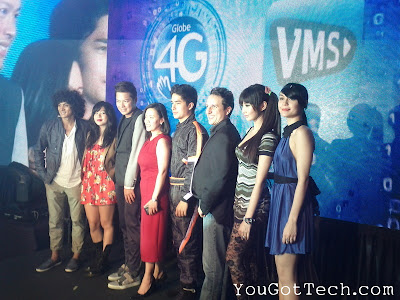 During the launch, Globe mentioned their new Video Messaging Service (VMS). This is something I can try using my Nexus S. Just need to find out if my video messages can be access by anyone with/without a smartphone.
Posted by Aileen Apolo-de Jesus at 10:03 PM 2 komento:

Thought I'd do a little research to find out what kind of local Android apps we have from the Philippines. Here are some:

I just found these by doing a search for "Philippines" on the Android Market. Please let me know if you know of any Philippine-made Android apps.
Posted by Aileen Apolo-de Jesus at 2:28 AM 2 komento:

You've probably heard the announcement about Google's Chromebook which is coming out on June 15. The video above describes perfectly what the Chromebook is. When you turn on the Chromebook you are immediately brought to the internet without having to open a browser. This is definitely a new idea and would work perfectly for people like me who have everything (if not most) on the cloud.

I've been waiting for this to come out for a long time now and hope to experience working on it soon.
Posted by Aileen Apolo-de Jesus at 7:58 PM Walang komento:

Google announced last Thursday that Android users in the Philippines can now buy paid Apps on the Android Market - that means we can buy more games, social apps and work (productivity) type of apps. There are over 200,000 free and paid apps today on the Android market. Price of apps though are in US dollars, but you can buy it through Google Checkout which supports both Visa and Mastercard credit cards. 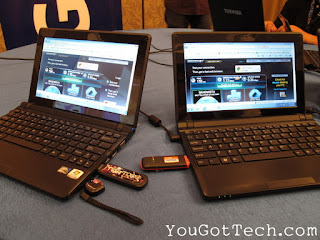 Last week, my vlogging partner, Coy, invited me to attend Globe's 4G presscon. Since I was in the area I said I'd go. It took me awhile to make my post coz I had to digest all the nosebleed, techie stuff that was discussed there.

So... I will not attempt to explain the technical discussion since I honestly did not understand any of it. What I understood though is the following:

1. Globe's 4G is still on its way. They just have a handful of sites that are up (one is near Heritage Hotel in Pasay).

3. You need a new device so you can enjoy the new network. If you don't have one, the new network is going to help improve connectivity for 3G users. 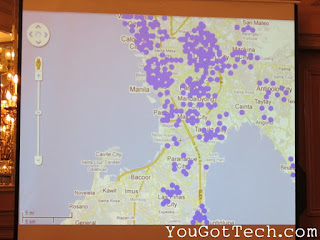 4. Globe is aggressively expanding availability and here's the map (unfortunately no roll out where I live). They have deployed it in 19 areas, namely Marikina, QC, Makati, Pasay, Las Pinas, Taguig and Manila.

5. Watch out for handsets, devices and apps that Globe's launching this May. I spotted a nice and shiny Android phone during the event :)

I had a problem getting my Cherry Mobile Android tablet to go online using 3G. I wanted to use a Smart SIM on it , but wasn't sure whether it was okay to use a Smart Buddy SIM or if I needed a Smart Bro SIM so I could go online. With Globe they don't have that differentiation. I tried to ask advise from Smart's customer care on Twitter, they acknowledged my query, but they never gave me an answer. I got advise from some friends in Smart and they said it's best to use a Smart Bro SIM on my tablet if I was just going to use it mostly for connecting to the internet.

So I did. The next question was about the APN settings. I did some Google searches, but nothing really helped. The Smart website didn't have any updated info on APN settings for a Smart Bro SIM. So I went to a Smart Wireless Center and showed the customer service person my settings and he said said they were fine. I wanted to check whether it would work, but he said I needed to wait an hour. I felt that he really didn't know and wanted me far away before I got the chance to check whether the settings I tweaked last night was indeed correct.

It didn't! So essentially I just wanted 30 minutes of my time waiting at the Smart Wireless Center and what "expert help" I was supposed to get wasn't there. That guy made me believe that my settings were correct and that it would already work. Argh.

So back to square one. I searched again on Google and chanced upon a comment in one of the forums. I tried several suggestions, but this one finally worked (I use an Android tablet):

I simply added an APN and inputted "smartbro" as the APN Name and APN, saved it, and finally managed to go online.

And to that customer care guy, well, gee, you should have just been upfront and said you were not sure.
Posted by Aileen Apolo-de Jesus at 1:11 AM 16 (na) komento:

What would Arnold Schwarzenegger and Stephen Fry be related to tweeter? And no it is not because they are twitter users. Or that both are actors and celebrities. What seem to be the common thread between the Austrian actor and the British comedian-actor and writer is technology.

The first starred in a movie that pumped his career in Hollywood and the second spoke at one time about technology. In the movie Conan the riddle of steel could be related to technology. The answer to the riddle of steel was that it was dependent on the flesh, ie the hand that wielded it. In the film, even a broken sword could be used to behead the main villain in the hands of Conan – Schwarzenegger.

The second spoke and his speech was recorded in a podcast. It was a witty and splendid speech that talked of several things from copyright to Apple. What is important to us though was something said during the open forum. Technology, new technology does not make one an instant Picasso, Oscar Wilde, Bill Joel or Wolfgang Amadeus Mozart. You have to have skill, talent and ideas to begin with. Technology amplifies these things. It is the means ny which creativity, skill and guts are whispered, sang and shouted out to the wide world via the world wide web.

An example of this is this latest endeavor done on twitter and tumbler – Pasyonistas.

Pasyon of the Passion is a lenten practice a form of story telling of the last days of Jesus Christ om the world. In art this has largely been depicted in paintings and sculpture – I believe Michaelangelo's Pieta is an example of this. It is a popular subject across the arts and the performing arts from Webbers and Rice's Jesus Christ Superstar, Godspell and Mel Gibson's the Passion. Personally, I like watching Jesus Christ Superstar and Godspell. Somehow I find them more light and at the same time deep – if you get what I mean.

Every year at the end of our street during Holy Week they close the street, erect a tent, set up a karaoke machine and people take turns reading aloud through the microphone accounts of the last days of Jesus Christ in a lyricak verse. You can hear it from one of the street to the other, flooding the street.

Across the country the Passion of Christ is re-enacted. And now you can also read the Passion before your very eyes in twitter and tumbler.

It is an interesting take on the practice of the Passion or Pasyon. Hence the name Pasyonistas.

I wonder how it will turn out in Twitter and Tumbler. Most of us will know how it will end but how this cultural and artistic online collaboration will end we shall have to see.

Smart TV Now and In the Future

The film Rio was being shown on the big screen. And the scene shifted to the slums of Rio de Jainero and people were shown watching television. I am not quite sure what the statistics are but I have a hunch there are probably more television sets than refrigerators in the world. Or perhaps the television hs become as ubiquitous as the radio and still more commonly used than the computer.

It may not be as widely used like the cellphone but you can find it in nearly every family house or in the room of a salaried worker. In the Philippines solar or battery powered tv sets are used to watch a boxing fight or it doubles as a mini theatre from which one will eventually screen films like Rio.

And television sets are getting to be smarter.

Samsung recently launched its new set of television sets. And aside from how eco-friendly the tv set was Samsung trumpeted that the Smart TVs – LEDs 8000. 7000. 6600. 6400 and 5500 would not only connect the family to TV broadcasts and cables but also connect it to the Web , of course viewing of web video is still dependent on the speed of one's connection.

At present of course such television sets can only be bought by people with means and a large wallet – very large wallet. But let us see in a few years the cost of set may go down and with that it may be a indespinsible gadget that can be used by the family to be online. Of course there are other factors that will determine other than cost Ease of use and overcoming the language barrier.

When that happens we may have an online community more representative of our society. Are we ready for that?

Also published at baratillo.net
Posted by Juned at 1:49 AM Walang komento: