Caring for Your PC 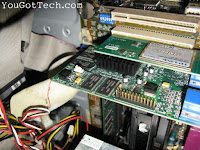 I've been a PC user since I was 10 years old thanks to my Kuya, but I never really understood the intricacies of my PC's hardware. I left this task "to the boys". I have to admit I've always been dependent on my guy friends and they always volunteered to do the "dirty stuff" because they felt that I would just end up breaking something.

In the last decade I left the care of my PC to someone I call my "PC doctor". I paid him monthly for the maintenance of my PC, but I was largely dissatisfied in the past year with his services. Stupid me I just blindly left my PCs to his care since I had no idea where else I could have my PC fixed or cleaned.

When George, my desktop PC, went in a coma last January I told my PC doctor that my desktop was dead and that I had no plans on reviving it. That was actually a big fat lie. I just didn't want him anywhere near my PC since I was quite shocked with how he cleaned my video card (he took some packaging tape, slapped on the board and striped it off like he was taking off a tape for pulling out black heads). I was traumatized.

So I learned my lesson when Sweetie graciously diagnosed George. My eyes were as big as saucers when he opened George's CPU. The dust he had accumulated looked like he was never cleaned at all. NEVER. My former PC doctor said that the reason he had to come monthly was because he had to clean George. I was really upset upon seeing how much dirt had accumulated inside George. It was a good thing that he did not overheat since the fans had so much dirt on the blades and the holes were blocked because of the dust.

Lesson learned: Your PC needs cleaning inside and not just outside. Check once in a while if dust is already accumulating inside the CPU.

Hard lesson learned: Do not just entrust the care of your PC to anyone. Back-check if they are indeed doing what you are paying them to do. 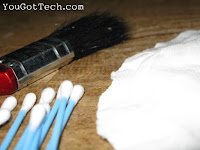 I heard that there's a small vacuum cleaner you could purchase so you could suck out the dirt easier.

Just make sure when cleaning the innards of your PC that: (1) you don't wet any part, make sure all your cleaning tools are dry; (2) be light, do not clean it up like how you scrub your bathroom, think that it's a baby you're cleaning up.

I'm still very much upset with my former PC doctor since I feel he's been duping me for almost a decade. Good thing Sweetie's great with PCs and he's teaching me how to properly care for my PC. George is still in the Sweetie PC Hospital, but we're expecting him to come out of a coma within the week.

What about you? Do you have any "PC doctor" horror stories? How do you clean up your PC?
Posted by Aileen Apolo-de Jesus at 8:18 AM